SIGN LANGUAGE IN A HEARING FAMILY WITH A DEAF CHILD 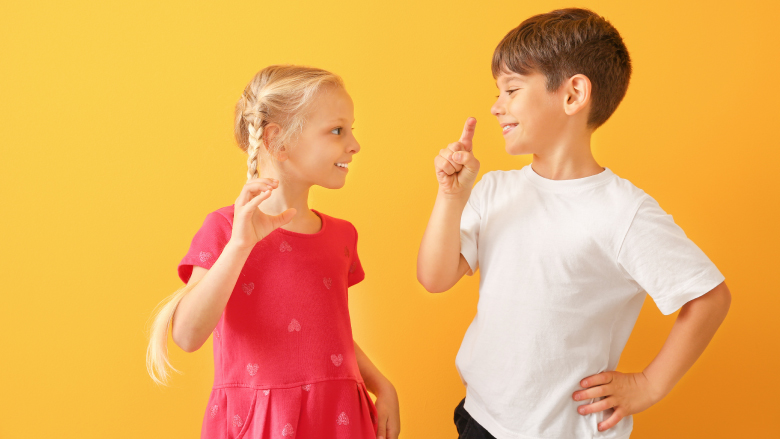 The subject is quite controversial, even though something is slowly changing in the way of thinking.

It is worth emphasizing at the very beginning that when providing a deaf child with a prosthesis, be it a hearing aid or an auditory implant, the main aim is the correct development of their verbal speech and other auditory benefits derived from the prosthesis. Such a device, however, as its very name suggests, is still only a prosthesis, and will neither suddenly turn our deaf child into a hearing one, nor make their hearing defect disappear irrevocably. Why, therefore, is there so much resistance to learning and using sign language in such families?

First, the myth, according to which using sign language to communicate with young children with hearing impairments blocks their development of verbal speech, has long been debunked.

Let us look at it from another perspective: by using both speech and sign language with hard-of-hearing children, we can support the development of their verbal speech. However, it is not the only benefit; a deaf child, who has been provided with an implant, and knows both languages (the sign one and the verbal one) become open to two worlds. Nowadays, when the awareness of various disabilities is slowly increasing and the demand for interpreters of sign language is growing, we make it gradually easier for our children to follow that path. Moreover, our child will not feel lost and desperate when they suddenly find themselves in the world of deaf people and won't be able to communicate with them in their language, even though they are one of them. They will be just as hopeless, as when among hearing people, when without their hearing aid.  Naturally, it doesn’t have to be that way. Every child is an individual case. And of course, if the family is hearing, the child does not necessarily need to have any contact with deaf people at all. Nevertheless, knowing an extra language is always beneficial. Why, for instance, do we have to learn English at school? Why do people voluntarily sign up for various, often expensive language courses (including sign language)?

Ok, if that doesn't convince you, let's consider the following scenario.

A child is born, the hearing screening does not turn out well, and subsequent, detailed ABR examination confirms a serious loss of hearing. The only thing left is to seek help through hearing implant surgery and/or provide the child with hearing aids. While the latter is usually not very problematic – when it comes to hearing implant surgery, the situation is usually much more complicated. You have to wait quite a long time: both to get qualified for the surgery, and also for an appointment. This is then followed by receiving the equipment, setting the speech processor for the first time, and waiting for auditory responses. If we're lucky and have acted rather quickly, our child should get a hearing implant around the first year of their life. However, it sometimes happens much later.

In a situation like this, we still have a lot of work ahead of us: we need to make up for the whole first year of our child's "deaf" life. While healthy, hearing children begin to pronounce their first words and are somehow able to communicate with their loved ones, our child has to begin with learning to recognize the first sounds. The process is long and arduous. Before we make it to babbling, and finally to the first word, other children are often already at the stage of building simple sentences (like “me play”).

But... Before these healthy, hearing children have learnt to speak, due to their correct development and their immaturity to communicate verbally yet, they expressed themselves through gestures and crying. That's right, gestures. They pointed their finger at a particular, desired object. They cried when they lost sight of their mum, had a wet diaper, or were hungry. They waved their hands while demanding to be entertained, put their hands in a "bravo" gesture when they enjoyed something, pointed their finger at their favorite food, or a favorite toy.

This behavior is a normal stage of development of a child. It allows them to communicate with their environment even before mastering verbal speech.

So why deprive our deaf kids of the possibility of such communication, and avoid sign language like the plague? Using the so-called "baby sign language", we can establish a strong communicative relationship with our child before they receive an implant or a hearing aid. In such toddlers, the basics of sign language are sufficient to enable them proper, age-appropriate communication. Isn't it wonderful that a child, who doesn't hear a dog barking, or a cat meowing, and doesn’t know what the animal is called (because they are unable to hear the word “dog”/”cat”) can point their finger at it and blur what they see? And also, that we can respond to them, and thus influence their proper development?

In addition, you have to take into account a possible failure of equipment, lack of possibility of changing its batteries, or any other unfortunate event that might occur. After all, life is unpredictable, as is the behavior of little children, who are curious of the world around them... Let's assume that we have to wait for a new piece of equipment, which has been serviced already for a week... Wouldn't it be better, in this case, to prevent the frustration of being unable to communicate, learn sign language, and thus be able to communicate with one's child, when no sound of speech reaches their ears, eh?

Let us know what you think and how you feel about learning sign language when a deaf child is born in a hearing family.

4.83 / 5.00 235 reviews
IdoSell Trusted Reviews
2022-09-21
Está tudo bem
2022-07-11
Everything is fine!
View all reviews (235)
This page uses cookie files to provide its services in accordance to Cookies Usage Policy. You can determine conditions of storing or access to cookie files in your web browser.
Close